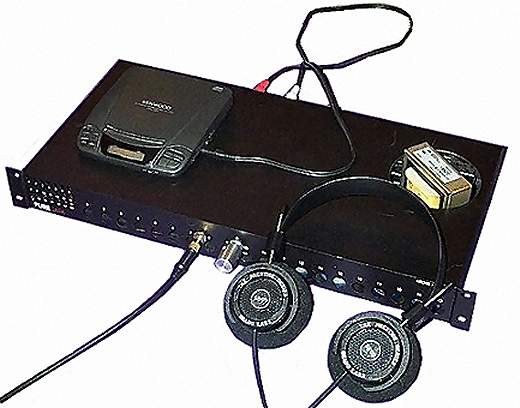 This headphone buffer is based on Greg Szekeres’ MOSFET Headphone Driver. It is a robust and reliable zero feedback, class A circuit. [Editor: And like the Szekeres MOSFET amp, this amp has unity voltage gain. Therefore, the audio source must supply adequate voltage to drive headphones.] The power supply is choke regulated. The circuit is configured for low impedance headphones like my 32-ohm Grado SR60s. Greg’s circuit was designed to be driven from the output of a preamplifier, as high frequency rolloff will result when a volume control feeds directly into the IRF510 MOSFET, due to the MOSFET’s high input capacitance.

The rolloff in the Szekeres amp is audible, but would not worry many listeners, since it tends to make for a smoother, more powerful sonic presentation overall. It is avoided if the MOSFET is driven by a JFET cathode follower with low output impedance. A JFET follower also has a high input impedance, making it an excellent input stage. Due to its flat frequency response, low noise, soundstaging, tonal balance and lack of grain, I recommend the circuit, and feel that it can – with patience – be developed into a reference class component. The amp can be tweaked to sound bright or dark, warm or cold.

If a signal from the volume control feeds directly into an IRF510 MOSFET, there will be a high frequency rolloff due to the MOSFET’s high input capacitance. Contrary to popular belief, the output coupling capacitor is not the source of the limited high frequency response. Two unbypassed low impedance 470uF electrolytics were used in parallel, and the response was less than a quarter of a dB down at 50 kHz!

The output impedance of the JFET follower is only a few hundred ohms, so it drives the MOSFET with a flat frequency response. Since it has a very low input capacitance, a 100 kOhm volume control can be used without penalty. A flat frequency response translates into less coloured, more realistic sound (though not necessarily the most likeable). The frequency reponse of this amplifier, measured with a real load (Grado SR60s), is 20-20kHz ±0.2 dB. The amp’s output impedance is a constant 3 ohms.

Originally the decoupling capacitor on the MOSFET drain was 1 uF. It was replaced with 470 uF, and all the film bypass caps were removed or replaced with electrolytics. That seems contrary to the normal practice, I know, but I had experienced ringing that was sourced to the 1 uF film decoupling caps. So I decided to get rid of all of them. I don’t miss them, either: the low inductance electrolytics are effective to well past 100kHz, and don’t distort much either.

This amplifier project took more time than I expected. I am more familiar with tube circuits, and the learning curve for solid state circuitry was steep. What I had not properly understood was how critical power supply design is, for high current circuits like this. Voicing this amp is all about the power supply. The amp had been at the “good but not perfect” stage for several months. I made changes, improvements even, but I did not nail it until I concentrated on the power delivery channel, (a.k.a. the region between the power supply and the signal circuit).

The power supply has a choke input and sounds better than a regulated supply. A choke input is used in the power supply to prove that this arrangement can and does sound better than voltage regulator ICs. Observing the supply voltage on an oscilloscope, the ripple is a 120Hz sinewave about 3mV rms: high frequency noise components so pernicious in regulated supplies are absent.

The ripple is fairly high, however, and unless the bias voltage to the gate of the JFET is carefully filtered, there will be audible hum. A 500K resistor separates the gate from the voltage divider, and a 10 uF cap bypasses the bottom half of the divider, shunting the ripple on the bias voltage to ground. Ripple at the output (0.3 mV rms estimated) is barely visible on the ‘scope, and not audible.

The operating voltage for this circuit is 12-15V, which means that it is only suitable for driving low impedance headphones (60 ohms of less) like those made by Grado. High impedance headphones need more voltage headroom. The trim pots on the bias supply can be adjusted to get the voltage at the source of the mosfet equal for both channels, but the JFETs may require matching to get the voltages roughly equal first. The bias voltage is about 5.5V, the source of the JFET, directly coupled to the gate of the MOSFET is about 7.5V, and the source of the MOSFET is about 3.5V. This ensures sufficient headroom, as long as the signal isn’t above 1V rms.

The source resistor on the MOSFET can be any value between 10 and 30 ohms. Just remember as the value goes down, current demand and heatsinking requirements go up. The two 100 ohm gate resistors are important. The sound is smoother with them in, so leave them in.

The frequency response of the amp can be adjusted to taste. The MOSFET’s gate resistor acts with the MOSFETs input capacitance to create a low pass filter. Increasing the value of the gate resistance will cool off a bright or too prominent treble. The bass response can be rolled back by removing one of the output coupling capacitors, or decreasing the capacitance value. Adding more capacitance does not increase the bass, but reducing the treble as described above will subjectively produce more bass.

There are many other changes which are audible but not measurable. The quality of the coupling capacitors for example. The amp’s sound is affected by the type as well as the value of the coupling capacitors. I use Sprague “orange drop” 225P 1.0uF / 100V on the input. Although they are metallized polyester, they sound warm and natural. 0.47 uF or 1.0 uF polypropylene (such as the Solen caps) would be interesting alternatives. Exotic audio-specific upgrades may be worthwhile.

I recommend trying low inductance electrolytic capacitors, such as the inexpensive Panasonic FC series (available from Digikey) for the output. The output coupling capacitors must be electrolytic. If big, standard types are used, the sound will be muddy and distorted. Bypassing generic electrolytic caps does not work: the sound is still muddy and distorted, with added high frequency noise. I’ve tried various configurations and settled on using parallel, unbypassed, low-inductance electrolytics. Every major manufacturer makes them, as they are used in switching power supplies. Mine were United Chemi-Con SXC. 1000uF was better than 470uF, but 2x470uF was best. Adding more was not of further benefit. As the low inductance caps are quite comfortable up to 100 kHz, there is no need to bypass them, and indeed they sound better that way. 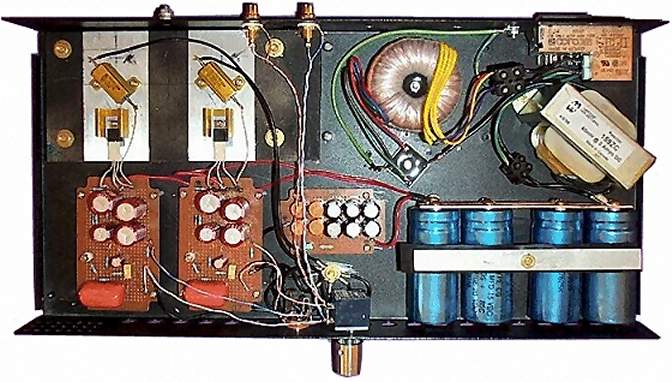 The power supply is straightforward low-tech: toroidal transformer, diode bridge, choke, and a huge filter reserve for low ripple. I admit that the choke input power supply is expensive to build, not least because of the large filter capacitance required. Its worth it, though. The capacitors should be computer grade, but these can often be found cheaply as surplus. I scrounged my low inductance caps from IBM computer power supplies, but they are available at low cost from most suppliers. Digikey sells the Panasonic HF/HFU and HFS series which should all work ok.

Originally I had a 500mA power transformer, and it wasn’t happy even though technically the current drawn was well below its rated limit. A choke input is a gentle load, but over-rating the power transformer improves the perceived bass response. A 2A output (30VA) transformer is suggested as a minimum. The Talema toroidal transformer is recommended. It runs quiet and cool even at 1 amp load current. The voltage will be closer to 13.5V with this transformer.

The wires joining the circuit board to the power supply were beefed up to 16 AWG stranded from 24 AWG solid core. Both these changes made comparitively large improvements in sound. I also added a filter pack of 10 smaller electrolytics on a separate board. The improvements with this arrangement were noticeable but not really significant, so I haven’t included it in the circuit…

Below is a collection of design notes concerning component selection, layout, and alternate configurations.

A note on testing. In addition to my ears and SR60 headphones, I also drove the amp with sine and square waves and monitored the output on an oscilloscope. The sine waves weren’t instructive, since the frequency response had been flat for a long time, yet the sound was still off. The transients were the problem. The 10kHz square wave was more useful, helping me track down the ringing caps, and checking power supply recovery. In the end though its about listening, and what you want it to sound like. For that reason I encourage anyone building this amp tweak it to their own personal satisfaction. Hint: the distribution of decoupling and power supply capacitance is the place to start.

Yes, the sound. Everyone will tell you their DIY project sounds great. I will just say that I’ve been critically listening to this amp for a long while, and the development phase has been long and hard. It is surprising how much improvement you can “eke” out of a given circuit concept. It is at the stage now where I’m at last happy with it, and further tweaking may not pay further dividends.

The amp is rather full sounding, with expansive, slightly loose bass. The highs are extended but not shrill, with a slight burnished quality to them. Overall it is sweetly musical, the way I like my audio. Never satisfied, I may look into modifying the output coupling to batten down the bass a little, or make further minor adjustments to the bypassing scheme, but it’s 95% of the way there.

This site uses Akismet to reduce spam. Learn how your comment data is processed.