One of the more frequently requested projects on HeadWize has been a switchbox for selecting multiple audio inputs. I built this passive preamp/switchbox several years ago to switch between two stereo sources (a portable FM tuner and portable CD player) AND two stereo outputs (a computer speaker system and a headphone amp). It’s very compact (perfect for the desktop audiophile), easy to build and uses commonly available components – including a shunt-wired linear taper pot for a volume control. The simple, low-cost design puts it within reach of beginning electronics DIYers.

A passive preamp is basically a preamp that has switching functions and a volume control, but does not amplify the incoming signal. Because there is no amplification, the input signal must already be at line level, which is loosely defined in the range of 0.5V to 1.0V. An active preamp can increase the signal strength several times before feeding it to a power amp; however, modern power amps (and headphone amps) have enough gain that they can be driven directly from the line-level source. With the exception of certain phonograph cartridges and microphones, just about every other audio component I have ever encountered has a line-level output. Portable players may have a separate line-level output, but if not, the headphone output can be used instead – with the possible penalty of slightly more noise.

Figure 1 shows the schematic for the passive preamp/switchbox (hereafter called the “switchbox”). It uses DPDT switches to toggle between the two sets of inputs and two sets of outputs. The input and output grounds are all connected to the common circuit ground. Most audio components use a common ground between the channels. The circuit must be modified to work with components that require separate grounds for each channel (see the next section for details).

The volume control is probably the most interesting feature. Since the enclosure I wanted to use was very small, I needed a mini dual pot with audio taper for a volume control. Such mini stereo pots are very hard to find in the U.S. Instead, I converted a dual 100K linear taper pot that I already had on hand to simulate an audio taper by connecting a 22K-Ohm shunt resistor from the pot’s wiper to ground. This technique produces a pot with an input impedance that varies from 18K-Ohms to 100K-Ohms, and has the additional advantage of mitigating any mistracking between sections.

A passive preamp/switchbox is one of the simplest electronic projects that there is. I’ve shown one of many possible configurations here. Despite the cramped space of the enclosure, it went together very quickly. I didn’t have to use a circuit board. The only “loose” parts were the shunt resistors, which I soldered “free-floating” to the hookup wire. The tension of the wires was adequate to hold them in place. The resistors could have been soldered directly to the pot as well. Speaking of hookup wire, I used 22 ga. solid wire throughout. Be sure to keep all wiring short and neat.

I chose standard 3.5mm (1/8″) stereo mini jacks for the input/output jacks, because this type of jack is common in portable players. Radio Shack sells a version of these jacks (RS 274-249). I ordered higher quality units that have spring-loaded contacts from Mouser Electronics (stock no. 161-3502). I strongly recommend the jacks with spring-loaded contacts, as they are not expensive (less than $1.00 US each) and less prone to metal fatigue, which can result in intermittent connections. A good alternative to mini jacks would be RCA-type jacks, which are found on most non-portable audio gear. 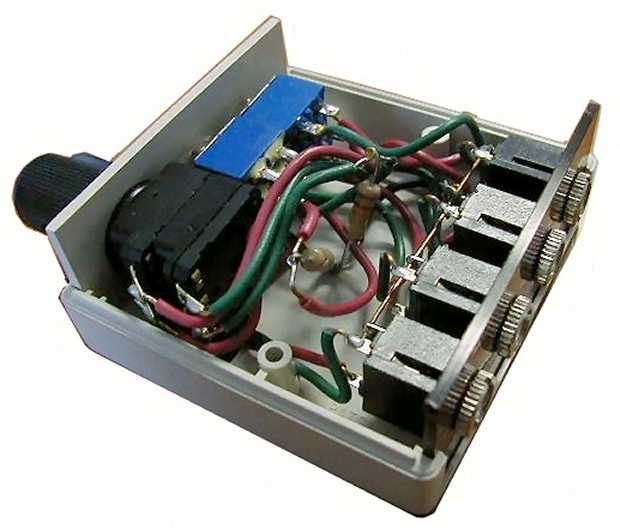 If my enclosure had been metal, I would have grounded the entire circuit to the enclosure. Since I used a plastic case, one piece of wire served as the ground bus. To wire the input/output jack grounds, I stripped about 2″ of insulation off one end of the ground wire, slipped it through all of the ground tabs on the jacks and then soldered it in place. The circuit ground was then be connected to the other end of the ground wire. To build the switchbox with separate grounds, use two ground bus wires – one per channel, but very few, if any, source components require a separate ground for each channel.

For those DIYers who use a metal case, mounting the jacks on the metal may be adequate to establish an electrical ground with the case (without having to wire the ground tabs), because the metal mounting flange is usually connected to the jack’s internal ground. Confirm that the jacks are grounded by measuring the resistance between the ground tab on each of the jacks and any exposed metal on the enclosure.

The DPDT switches are mini or micro-mini switches. The ones I used came from Radio Shack. In my circuit, only the “hot” portion of the signal is switched. The input and output grounds are all connected to the common circuit ground. This configuration is standard on most commercial preamps and has worked fine for me. However, Tangent in the forums suggested switching both the hot and ground parts of the signal to avoid any ground loops using 3PDT switches (or 4PDT switches if the circuit is wired with separate channel grounds). If 3PDT and 4PDT switches are difficult to find, or to build a switchbox with more than two sets of inputs/outputs, try substituting rotary switches.

The volume control is a Piher 100K dual linear taper pot (model PC16) – also from Mouser (stock no. 531-PC16DC-100K). They cost about $3.00 US each, as I recall, and are sealed to keep out dust and dirt. I ordered three of them, and all had significant tracking errors between the sections, especially at the extremes of rotation. A multimeter helped me select the one with the lowest mistracking. The shunt resistor further smoothed out the pot’s tracking characteristic.

The shunt resistors are 1/2W carbon film types – but 1/4W metal film resistors would do as nicely. In general, the shunt resistor should be about 1/3 to 1/4 the value of the pot itself. The best way to determine the value of the shunt resistor is to experiment with different values to get the best volume change characteristic and best tracking as the pot is rotated. Any value for the linear taper pot can be used, so long as the minimum input impedance of the converted pot does not fall below about 5K-Ohms, which is the minimum load for most line-level outputs. Another option is to get a high quality linear pot with good tracking accuracy. Of course, a high quality audio taper pot is the best solution; then the shunt resistor would be omitted entirely.

The plastic enclosure is by PacTec (I think the model number was JM-22, ordered from Digi-Key Electronics, which no longer sells them) and measures a mere 2.25″ x 2.25″ x 1″. The front and rear panels are removable. PacTec included two opaque and two transparent red plastic inserts for the panels. The opaque panel on the front was just wide enough to accommodate the switches and the Piher pot. I used the transparent red panel on the rear, because it was the right thickness for mounting the input/output jacks.

This project helped me to organize the electronic clutter on my desk and allowed my headphone amp and powered speakers to co-exist peacefully. The total parts cost came to about $15 US – not bad for a custom passive preamp/switchbox. I could gush about how “neutral” and “transparent” sounding it is. Those who react sceptically to the cheap Piher pot and who insist on top-quality components throughout can install a more luxurious volume pot and gold-plated RCA jacks in a premium enclosure, as their budget allows. Such a component would not be out of place in a high-end audio system.

This site uses Akismet to reduce spam. Learn how your comment data is processed.